Researchers used MicroCT scans to reveal fascinating stories about the history of ancient books. Their findings are included in an Aga Khan Museum exhibit 'Hidden Stories: Books Along the Silk Roads.'

An ancient book can tell a story in more ways than one.

A wooden cover can offer clues about the climate when the book was made. Its paper and ink can tell us about technologies that were used at that point in history.

Until Feb. 27, the University of Toronto and Aga Khan Museum will reveal these stories and more in the collaborative exhibit, “Hidden Stories: Books Along the Silk Roads.”

“It’s truly a feast for the eyes,” says Alexandra Gillespie, vice-president and principal of U of T Mississauga. “When you go into the exhibit, you immediately start seeing objects that begin telling you a story about the transnational nature of the production of books in the pre-modern period.”

The exhibit is the fruit of a partnership between the Aga Khan Museum; the Book and the Silk Roads project, an Andrew W. Mellon Foundation-funded initiative driven by the Old Books New Science (OBNS) Lab at U of T Mississauga; the Institute for Advanced Study (IAS) in Princeton, N.J.; and University of Toronto Libraries’ Information Technology Services (ITS), which is hosting a digital companion site for the exhibit.

Gillespie, the principal investigator with The Book and the Silk Roads project and director of the OBNS, says the ancient artifacts included in the exhibit – books, robes, scrolls and textiles – reveal how these objects shaped life surrounding one of history’s most important trade networks.

“We use the word ‘book’ to mean any kind of text-bearing object,” Gillespie explains, adding that the exhibit shows “conversations that are occurring between these objects.”

In addition to the artifacts, Gillespie says the exhibit will show visitors 3D MicroCT scans of books under non-destructive X-ray, which were conducted by U of T and Western University in collaboration with the Ontario Museum of Archaeology and St. Joseph’s Health Centre in London, Ont.

Gillespie says the MicroCT scans can reveal fascinating stories about a manuscript’s history – for example, craft technologies of the past.

Rachel Di Cresce, digital project librarian at the ITS department and the project librarian for U of T’s The Book and the Silk Roads project, says the exhibit’s digital companion site also includes MicroCT scans of some of the artifacts that are on display in-person. 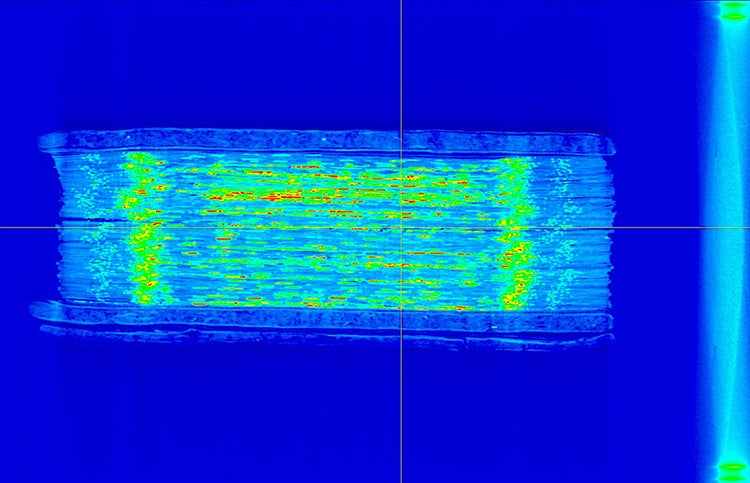 One of those artifacts is a Book of Hours known as Canon Grandel’s Prayer Book, which was made in 15th century France and was added to the exhibition by Western University's Archives and Special Collections. Scans of the book reveal empty sewing holes and other traces of the original medieval binding, which was removed more than 300 years ago when the book was rebound with its current cover.

“We know at some point the book was taken apart. We have kind of lovingly referred to it as a ‘ghost binding’ because when it visually pops up in a scan, it looks a little ominous. And you can see that there's traces that the bookmakers have actually left behind. There’s some greater story to be told there that we don't fully know yet,” Di Cresce says.

She adds that the digital exhibit will also have multimedia features including an interactive map, videos exploring key exhibition objects, an audio track of a chant song from a 16th century Spanish choir book, and a zoom-in function to view intricately detailed manuscript paintings.

Online exhibit visitors will also be able to see some of the same items on display at the museum in a digital format, including items from U of T’s Thomas Fisher Rare Book Library, Western University’s Archives and Special Collections, the Aga Khan Museum, the Royal Ontario Museum (ROM) and the Marshall and Marilyn Wolf Collection.

U of T's Fisher library has loaned a diverse selection of historical codices, pothi books and scrolls from Turkey, Ethiopia, Egypt, Tibet and Nepal, and ranging in date from the 11th to the 20th centuries.

Whether visitors attend the exhibit online or in-person, Gillespie says they will be surprised by the beauty of these objects – including a 17th-19th century manuscript containing the Hindu Bhagavad Gita, on loan from the Fisher library.

“The beauty really shines from them,” Gillespie says. “We often think of books as utilitarian objects designed to carry a text ... but these are also objects of extraordinarily exquisite craft, of amazing human ingenuity.”