From Something to Nothing: Jewish Mysticism in Contemporary Canadian Jewish Studies 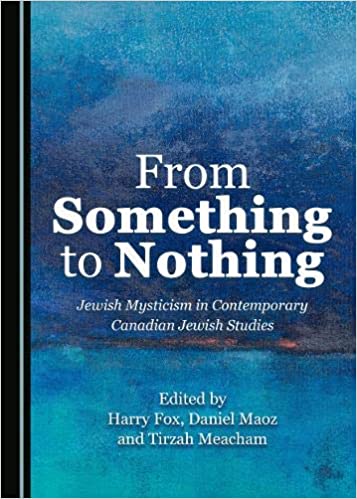 Jewish mysticism approaches God as no-thing or nothing, reflecting Judaisms traditional identification of God as incorporeal. Whereas technical philosophical language often employed to discuss Jewish mysticism has a tendency to ward off otherwise interested readers, this study sufficiently breaks down the technical language of Jewish mysticism in its various expressions to allow a beginner to benefit from what may otherwise be indescribable and only approached by consideration of what is not rather than what is.

Integral to the title, From Something to Nothing, is the concept that God cannot be something, because that would be restricting, so God is simply no-thing. Ironically, the conventional religious expression for the biblical notion of creation is something from nothing, whereas the title of this volume is its precise opposite, which may at first seem to be illogical creation in reverse. However, in a volume dedicated to various deliberations on magic and mysticism, the ultimate reality may receive expression as nothingness, that is, no-thingness, no quality associated with things. What adds to our difficulty today is that nothingness is inextricably linked with silence. Is silence also an element or indication of an ultimate reality or its absence? Or is it merely the reflection of nothing whatsoever? This is at the heart of modern debates between atheists and believers. Believers feel that even this silence speaks to this ultimate reality, whereas atheists claim that if you cannot show it, then you do not know it. In other words, believers are victims of their own wishful thinking.